Footballguys #81 - 7/11 - What's Going To Happen With The Seattle Backfield, IDP Info, News And Notes And More

Good Thursday to you.

We've got more new Content for you plus a few bits of News and Notes you need. It's that calm period before the storm of Training Camps. Plus I have a Non-Football note at the bottom here for you guys that don't mind me getting on the soapbox every once in a while.

A. What's Going to Happen in the Seattle Backfield? When Rashaad Penny was selected in the first round, everyone seemed to pencil him in as Seattle's stud runner. Then head coach Pete Carroll gushed all spring about how great Chris Carson looked. Plus, C.J. Prosise and J.D. McKissic look the part of third-down backs. How much of a load can Penny command?

B. Eyes of the Guru IDP Info, Part 4: AFC North Our John Norton with an overview of defenses in the AFC North with an emphasis on individual defensive players and their fantasy value.

Mississippi State S Brandon Bryant is expected to be signed by the New York Jets after going undrafted in the supplemental draft, according to a source.

This is a depth move and perhaps a special teams addition. Bryant generated some turnovers for Mississippi State, but not so much he is expected to step right in. It could be a savvy move by the Jets as he was expected to be picked in next year's draft so it's almost a free pick.

Western Michigan CB Sam Beal was taken by the New York Giants in the third round of the 2018 supplemental draft Wednesday, July 11.

Eli Apple could feel some pressure here. Apple showed great promise his rookie year, but his attitude last year caused a lot of friction in the secondary. We thought he might be safe after the draft, but it seems like that wasn't the case. Beal is talented, and certainly no worse than Apple. the only things which could save Apple is 1) the secondary is razor thin and 2) Beal could struggle to succeed in his rookie year.

Seattle Seahawks WR Doug Baldwin has amassed an NFL-high 2,315 yards from the slot position over the past three seasons, 58 more than second-place Jarvis Landry and 364 more than third-place Larry Fitzgerald.

Baldwin should continue to be Russell Wilson's top target. The one question is whether the offensive line -- if you can call it that last season -- gives Wilson the time to throw. Last year they didn't and Baldwin's catches fell, though he was only credited with two drops all year. Wilson just lacked the time for accurate passes. Despite that, he still put up top 15 numbers. Right now he's tracking as the 10th receiver taken off the board, and we think his volume will bear that out and make him a smart selection.

Los Angeles Rams QB Jared Goff led the charge for the team's offensive breakthrough in 2017, as the Rams used significantly more condensed formations (stacks and bunches). The Rams led the league in passing attempts (286), passing yards (2,328) and passing touchdowns (18) in those formations, per Pro Football Focus.

If Goff doesn't get Sean McVay's car washed on a regular basis - or at least take him out for Fatburger or In N Out - he's crazy. McVay's offense fit Goff like a new set of tires on the 101 freeway. Brandin Cooks is an upgrade over Sammy Watkins and Todd Gurley should build off a year where he really turned a corner. Goff is set up for a nice 2018 and while we aren't calling him out as a QB1 prospect -- and his ADP of 15th quarterback taken doesn't have Fantasy GMs seeing him like that either -- we feel he's going to be a solid backup fantasy quarterback with upside this year.

Ending this one with a non-football note.

We're used to thinking of heroes as people on a sports field or a movie screen. I believe that's not usually where you find them.

I think this is what a hero looks like. 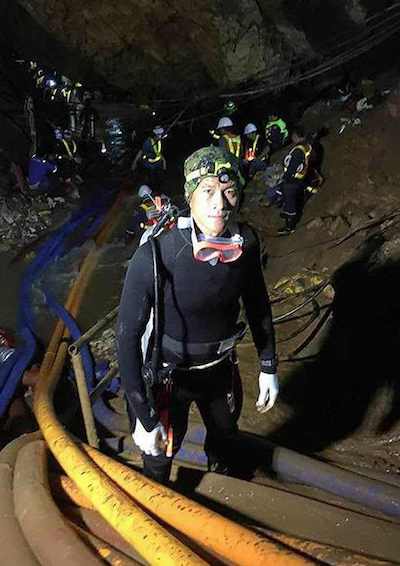 This is the last known picture of Saman Kunan. Mr. Kunan was a retired SEAL from the Thai Navy. He volunteered to help the children and their coach trapped in the cave in Thailand and he died last Thursday preparing the way for the rescue.

Rock on, Saman Kunan. Say his name. He's earned it. It's a reminder this world still has people in it prepared and ready to do awesome and selfless things.

Thanks for reading and thanks for being part of the Footballguys Family.

We'll see you tomorrow with the Update.

Peace and Grace to you.