Speed. DeSean Jackson is speed. One receiver, 11 losers on defense. He eats losers for breakfast. Breakfast could be good right now.

No, no, we are talking about DeSean Jackson.

If the Tampa Bay Buccaneers were missing a home run threat, they got one in D-Jax. Thrice he has led the league in yards per reception, including last season when he averaged 17.9. His career average is 17.7, and we can expect him to hover near that average in 2017 given his history and likely role on the Buccaneers. The question is whether his explosiveness will translate to fantasy scoring.

For all the big plays, Jackson has never cracked double digit receiving touchdowns. He has made up for that with his incredible kick returning skills, but those have waned over the years. For Jackson to be a force in fantasy football, he will need to make the most of his opportunities and get into the end zone a bit more often than he has in recent years.

Just 14 total touchdowns in three seasons with Washington hampered his fantasy value. He will need to approach double digits in 2017 to make up for the next inconvenient truth.

Gone are the days DeSean Jackson is a No. 1 receiver. He hasn’t led his team in targets or receptions since he was an Eagle, lagging behind the likes of Pierre Garcon and Jordan Reed in Washington in recent years. Even when he was in Philadelphia, Jackson didn’t exactly receive Calvin Johnson-like target numbers. His career high is 126, 15 less than Terrelle Pryor got last season with the Browns.

Dating back to 2009, DeSean Jackson has never seen fewer than 30% of his team's Air Yards in a single-season with PHI or WAS.

Jackson isn’t coming close to leading the Buccaneers in targets -- Evans commanded a whopping 173 last season. The second-most targets for the Bucs? Adam Humphries with 83, albeit he had four starts to his credit.

That is the rub, though -- Humphries was the second-best wideout in Tampa Bay last season? No wonder Jackson was a priority in the offseason. The Bucs signed signed him to obtain a true Robin -- or maybe Nightwing -- to Evans’ Batman. Jackson is a proven receiver capable of stretching the field, assuming he hasn’t lost a gear now that hit the big 3-0. If that duo

Whereas Evans is a volume scorer, D-Jax is a laser-guided missile. This is problematic from a weekly projection standpoint because Jackson might only have a handful of targets on any given week. We can do our best to look at matchups and opposing defensive tendencies, but if he commands anywhere between 90 to 110 targets on the year, he will have to make the most of five to six targets per game. Consider the fact Jackson had seven double-digit fantasy weeks last season in standard scoring formats. He didn’t crack six standard points in all eight other weeks he played. Jackson didn’t even hit 10 PPR points in those eight contests.

This makes him an excellent best-ball option while potentially giving redraft owners ulcers on a weekly basis. For some reason, though, Jackson’s ADP has plummeted in recent months. 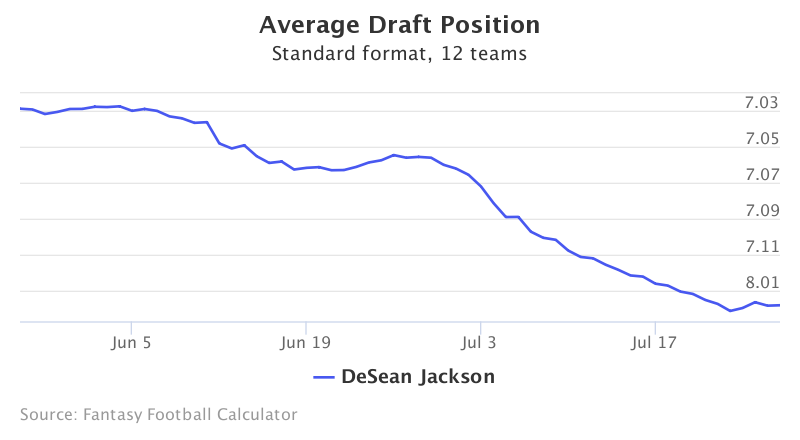 The consensus ADP here at FBG has Jackson as the 35th wide receiver off the board, while over at MFL he’s going 40th at his position on average. That’s quite the value for a No. 2 receiver with huge upside. Based on FBG projections below, Jackson is a borderline WR2 for the season, and he could be even bigger if properly utilized on a weekly basis or in best ball leagues.

One interesting note about the projections is that Bob Henry is the only one who gives Jackson his due in receiving average. Either the other rankers are expecting a big dip because of a new offense or age, or Jackson deserves a little bump in statistics in the other three projections.

Over the course of his career, Jackson has averaged just over 45 yards per touchdown -- the longest of any qualifying player ever recorded1. No active player has caught more 20+ yard touchdowns than Jackson, who has seen 35 of his 45 career scores come from outside the red zone. That big-play ability has resulted in 26.4% of Jackson’s career PPR fantasy points coming on touchdowns from outside the red zone, the third-highest percentage among 119 active players with at least 150 career targets.

Jackson’s skill set is one that we’ve arguably never seen before and gives Tampa Bay a weapon that their passing game is craving.

In the common era of deep threats, DeSean Jackson stands out.
Jackson is one of seven WRs to have 8000+ CAR REC YDs on 17.0+ YPR. pic.twitter.com/txOMRdKBPU

Mike Evans loves having Jackson on board, per Aaron Wilson of the Houston Chronicle:

"This is going to be awesome," Evans said. "Obviously, I think we could be one of the best tandems in the league. DeSean is an explosive receiver. I think we can do great things together.

"As soon as he got signed, we had dinner and we connected right away. We knew each other already. I've always been a fan of his game and the swagger he brings. Having him on the team will be very helpful."

How You Should Handle Michael Thomas' Surgery

A Tale of 2 QBs and 2 Very Different Saints Teams

Austin Ekeler Will Win You a Title in 2021

Joe Mixon: The Only Workhorse Available in the 2nd Round